On August 4, 1896, in Vancouver, Roderick junior married Annie Storey, who was the sister of Jonathan Storey. She was born in Collingwood, Ontario (although one source says England) on June 28, 1872. Her parents were James Storey and Mary Burton.

Roderick junior died in Vancouver after going to the hospital for what was expected to be a tooth extraction. He developed problems relating to his heart, and he died suddenly. He was buried in Mountain View Cemetery in Vancouver.

He left a large estate, part of which included his interest in Storey & Campbell.

Annie tried to sort out the Storey & Campbell business with her brother, Jonathan. She ended up suing Jonathan to get him to sell some property so that he could buy out the interest in the business that she had inherited from Roderick junior.

In 1925, Annie and Jonathan settled the case. Jonathan took over all of Annie’s interest in the Storey & Campbell firm. 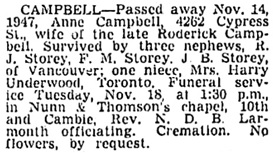 Roderick junior and Annie did not have any children.

“Death came unexpectedly to Mr. Rod. Campbell Jr., this morning after an illness of a few days. The news of the sad event has spread a gloom in the hearts of many people, for there were few men in Vancouver who were better known or more popular than was the deceased.

Mr. Campbell went to the hospital on Tuesday expecting to get out again on Wednesday. An operation on the root of a tooth, however, was more serious than expected. Yesterday his condition became alarming and early this morning he died.

The late Mr. Campbell was born in 1869 in Victoria County, Ont., and came to Vancouver thirty-one years ago with his parents, who are still residents of the city. Mr. Campbell senior entered the retail shoe business and his son was associated with him. Later Rod Campbell jr. went into business with his brother, Kenneth, and then some fifteen years ago became a partner in the firm of Storey & Campbell, with which concern he was actively associated at the time of his death.

He was a good citizen and a very popular man in business and in his social circle. In his younger days he was a prominent figure in amateur athletics, playing lacrosse on the first Vancouver teams. In later years he was a devotee to golf. He was a member of the Terminal City Club, where his death caused the keenest regret.

Mr. Campbell’s death will leave a gap in the business world of this city. Her personal friends are numbered in hundreds, and acquaintances in thousands. He leaves a wife but no children. The funeral arrangements have not as yet been announced.”

“Litigation involving the sale of shares in Story & Campbell Limited came to trial in Supreme Court this morning before Mr. Justice Morrison.

Mrs. Annie Campbell, 1001 Georgia street west, widow of the late Mr. Rod Campbell, is asking the assistance of the court in an attempt to compel her brother, Jonathan Storey, the defendant, to sell property, which they own jointly, and with the proceeds to purchase her interest in the firm of Storey & Campbell Limited. Mrs. Campbell estimates her interest at $159,200.

Following the death of her husband, November 22, 1919, Mrs. Campbell stated today she discussed with her brother the proposal that he should acquire her interest in the business. The agreement was verbal, she said, and was made during the course a trip in her automobile in July, 1920. . . .”