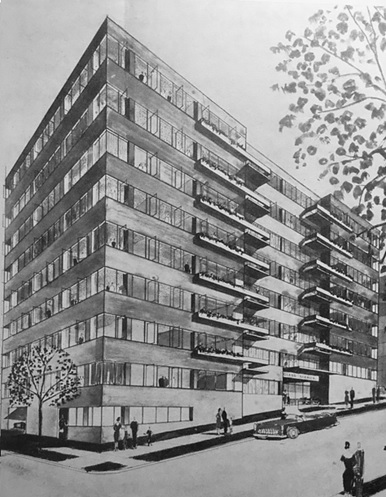 The lot at the south-east corner of Alberni Street and Chilco Street was empty until the 1950s. 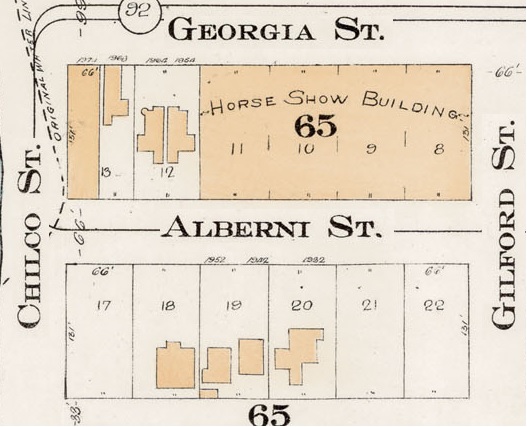 In 1912, Joseph Ambrose Russell hired Henry Barton Watson to design an apartment building for the site.

Drawing of the Russell apartments; by Henry B. Watson, architect; [about 1912], Vancouver City Archives, M-11-73; https://searcharchives.vancouver.ca/drawing-of-russell-apartents-by-henry-b-watson-architect.

Note: The small house at the left of the drawing (above) appears to be 1952 Alberni Street.)

The apartment building was going to occupy lots 17 and 18 at the southeast corner of Alberni Street and Chilco Street. It was just down the hill from the Russell house at 1973 Robson Street.

The building received a permit from the City of Vancouver.

For unknown reasons, construction of the Russell Apartments did not go ahead, and the site was still vacant in 1931.

In 1957, the Glass Manor appeared on the site, with an address of 700 Chilco Street.

Vancouver Sun, October 19, 1957, page 26, columns 3-4. [Note: although the illustration in this newspaper advertisement is similar to the first illustration on this page, the roofline is slightly different.]

Thanks to Murray at Vancouver As It Was: https://vanasitwas.wordpress.com/ for information on Joseph Russell’s proposed apartment on Chilco Street.

Leon Glassman, obituary, Published in Vancouver Sun and/or The Province on Nov. 16, 2017; http://www.legacy.com/obituaries/vancouversun/obituary.aspx?n=leon-glassman&pid=187260952. “Their first [building], Glass Manor, overlooking Lost Lagoon, was among the first luxury high rises in the West End.”