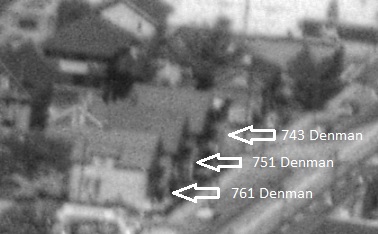 There is one reference to Lot 29 in Heritage Vancouver Society’s database of historic building permits: http://permits.heritagevancouver.org/index.php?cID=1 [searched June 28, 2019]. However, it is not clear which houses were part of the permit. 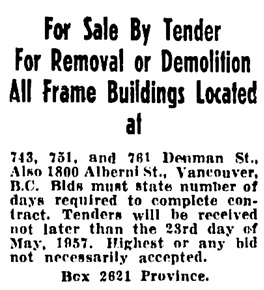 A low-rise commercial building later appeared on the site.

In 2018, a developer called Landa Global announced plans to build a 21-storey condominium tower on the site, with affordable accommodations on the lower floors.

“Vancouver-based Landa Global has acquired a prominent corner at Denman and Alberni in the West End, with plans for a 21-storey luxury condominium tower, with affordable housing units on the lower floors.

The upcoming tower, at 1810 Alberni Street, will have 36 high-end, luxury units on the upper floors, and 24 affordable market rental housing units on the second and third floors.

Note: later sources stated that the address of the new building would be 1818 Alberni Street: 1818 Alberni by Landa Global; http://vancouver4life.com/1818-alberni-landa-global/.