Stanley Shaw Attwell worked as a gardener for the City of Vancouver. He lived at 1844 Georgia Street in 1916.

Stanley Shaw Attwell was born on September 24, 1884, in Fulborne, Cambridge, England, which is about eight kilometres southeast of Cambridge: Fulbourn, Wikipedia article, http://en.wikipedia.org/wiki/Fulbourn.

In 1912, he entered the United States at Boston, Massachusetts, having arrived from England on the S.S. Ascania.

Sometime before 1916, Stanley married Bessie Evelyn Peterson. She was born in New Zealand on March 10, 1891. Her father was Peter Peterson, who was born in Lillesend, Norwary; Bessie’s mother was Matilda Jane Imrie, who was born in Ballarat, Victoria, Australia.

By 1915, Stanley was living in Vancouver and was working as a caretaker at Brockton Point in Stanley Park. In late September, a fire destroyed his house and contents.

By June 1916, he was living at 1844 Georgia Street. He enlisted in the Canadian Expeditionary Force during the First World War. His attestation paper stated that he was a mercantile clerk and engineer.

By 1924, he was working as a clerk at Pier D on the Vancouver waterfront.

He continued to live in Vancouver until the 1950s. 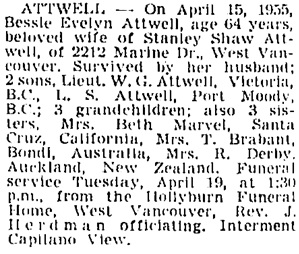 Stanley died in Montreal, Quebec on January 5, 1961. He was buried in Capilano View Cemetery in West Vancouver.

Stanley and Bessie had two sons.

William George Attwell was born in Napier, New Zealand about 1912.

On July 20, 1940, in Vancouver, he married Phylis Williams, who was a hairdresser. She was born in England about 1911. Her parents were Alfred Charles Williams and Margaret Edwards.

William was a lieutenant in the Royal Canadian Navy. He was stationed at Victoria in 1955.

Stanley may have had a brother named Wilfred Auckland Attwell. Wilfred was born on March 30, 1879, in Newmarket, Suffolk, England. He died in White Rock, British Columbia, on January 2, 1962.

Vancouver Daily World, September 20, 1915, Page 7: “Fire completely destroyed the caretaker’s house at Brockton Point, pear the cricket pitch, about 7:30 on Saturday night. The fire department responded to a call turned in at 7:25, but they were unable to prevent the destruction of house and contents. The place was occupied by Mr. Stanley S. Attwell, whose loss Is covered by insurance.”